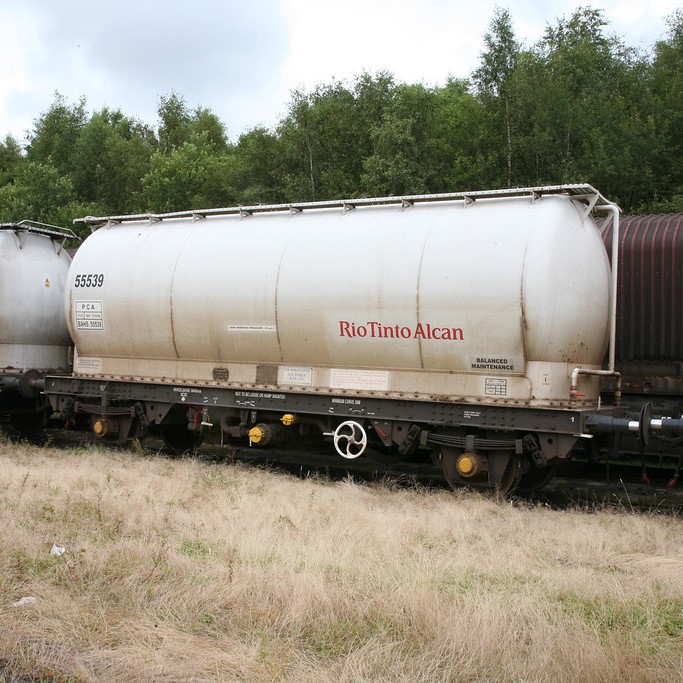 Revolution has received EP1 samples of its forthcoming 00 gauge, 1:76.2 scale Alcan PCA alumina tanks. These models represent the fleet of wagons diagram PC020A which have been in use since the late 1980s transporting alumina, which is used to make aluminium, from Blyth in Northumberland to the UK’s only remaining aluminium smelter at Lochaber at the base of Ben Nevis in the Scottish Highlands.

When built the wagons had ladders, however these were removed in the early 2000s. They entered service with Alcan, were subsequently taken on by Rio Tinto and are now operated by Alvance.

The models feature a wealth of separately fitted details to the underside and fine, photo-etched catwalks.

The wagons operate through some of the most beautiful scenery in the British Isles. In BR days they were usually hauled by Class 37 locomotives; then after privatisation EWS brought in Class 66s.

Nowadays GBRf operates the trains. Standard traction remains the Class 66, though in 2011 GBRf hired in Class 55 Deltic 55022 due to traction shortages.

Revolution is offering the models in packs of four differently numbered wagons in all the liveries they’ve carried during their long lives.

If you want to find out more about the fascinating operations at Lochaber smelter, in the stunning highlands of Scotland, or are interested in the operations of these iconic wagons, see our video here:

These samples will be on show at the Rails Open Day on Saturday August 27th. The next step is to generate the livery drawings so decorated samples can be prepared for approval, and then the models will go into production with delivery expected next year.