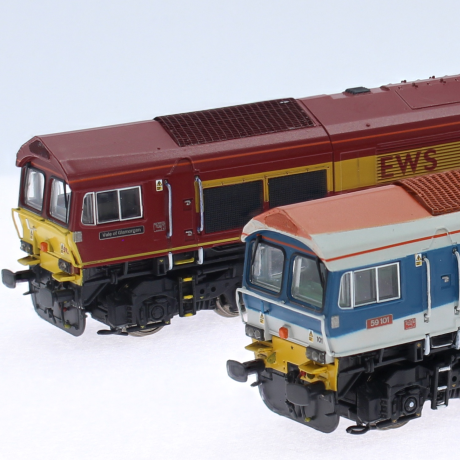 Revolution Trains has received decorated samples of its forthcoming Class 59 diesel locomotives. These models are now in the final stage of development before going into production.

All the samples will be on display at the upcoming International N Gauge Show at the Warwickshire Exhibition Centre on September 10th-11th.

Appropriately, the Class 59 locomotives themselves revolutionised the expectations of the UK railfreight industry in terms of both haulage and reliability when they entered service in 1986.

They were the first mainline diesel built for the UK market in the United States, and the first privately owned locomotives that British Rail permitted.

The original four Foster Yeoman 59/0 locomotives arrived in 1986, the second batch of four ARC locomotives in 1990 (along with an addional loco for Foster Yeoman) and then in 1994-5 six more Class 59s entered service with National Power. These were designated 59/2 and again featured extensive differences to the earlier versions, with prominent fire suppression systems, buckeye couplers and altered end details and revised roof latches and radio pods.

The Class 59/2 locomotives in National Power livery are available to pre-order as a twin set of 59201 (with commemorative bell) and 59206 exclusively from Rainbow Railways here.

In the late 1990s the Class 59/0 locomotives received a revised Foster Yeoman livery. ARC was taken over by Hanson the Class 59/1s were repainted and the Class 59/2 locomotives passed into the ownership of EWS and were similarly reliveried.

In due course the Class 59/2 locomotives joined their sisters on Mendip stone traffic, and as repaints became due the Class 59/0 locomotives went into Aggregate Industries colours while the 59/2s received DB red.

In 2019 the contract to move stone from the Mendip quarries was won by Freightliner. While the 59/0s and 59/1s remain in their AI or Hanson liveries, Freightliner is progressively repainting the 59/2s into its own orange Genessee and Wyoming livery.

The last chapter in the Class 59 story involves the single loco 59003. It was sent on long term hire to Germany in the late 1990s, and for this it was fitted with a UIC standard light above the cab windscreen and other modifications were made.

Then, in 2015, it was acquired by GB Railfreight and returned to the UK. Originally painted in GBRf’s Europorte scheme, it was later repainted into more standard GBRf colours. Both of these versions can be reserved exclusively from Rails of Sheffield here.

The Revolution Class 59 will have a full suite of lights, factory-fitted speakers in every model (and DCC Sound versions of all our variants available) and the DCC socket is accessed by a removable centre section – which replicates the arrangement of the prototype.

The switches that enable DC users to deactivate the red tail lights when running with a train can also be seen.

These decorated samples will be assessed and some small amendments to colours will be adjusted, and customers should also note that these were assembled and painted by hand using components from the first test mouldings, and as ever some small adjustments will also be made to improve fit and finish, especially of the etched parts.

Other than the exclusives you can pre-order any Revolution Trains Class 59 from our shop page here:

We are looking forward to showing these models off as the show season gets into full swing, and would be interested in any feedback. We expect the order book to close during the autumn, though we have not yet set a date.