Over 1100 cars of 1938 stock were built for London Underground with additional cars continued to be built into the 1950s.  The 1938 stock was revolutionary in both its styling and being the first underground stock with all the equipment located under the floor (rather than in cabinets above the sole bars).  The 1938 stock were used on the Bakerloo, Northern, Piccadilly, East London and Central lines at various points in their life – perhaps being most noted for running on the Bakerloo and Northern lines until the 1980s.  Following withdrawal of last 1938 stock sets in 1988, 20 cars were sold to BR for refurbishment and use on the Isle of Wight as the Class 483 units.

This is a 3-car add-on set to enable full 7-car sets to be modelled and matches the 4-car base sets. There is one add-on pack for each of the 4-car liveries (one end will have a Bakerloo line destination and the other a Northern line destination).  The 3-car pack is made up of: “A” motor – Trailer – “D’ motor

Please note that you are pre-ordering a model in development and delivery will be at least 12 months (but in return for pre-ordering you get a discounted price). 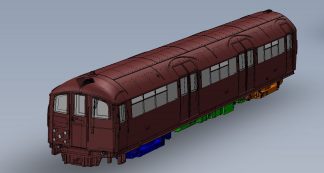